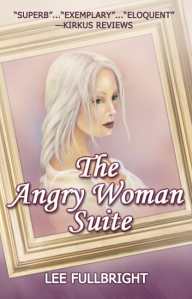 Hello, and finally! To all who’ve been following this blog—first, thank you!—and to friends and family who’ve asked, here it is, the first announcement:

The e-version of the novel, The Angry Woman Suite (about greed, murder, love gone bad, and imbalance in every single neurotic form there is—and who doesn’t love somebody else’s problems?) IS finally out as an e-book, yahoo! No, double yahoo!

The Angry Woman Suite e-book is now available from Amazon (and soon to be available for the Nook and ipad, too).

Here’s the link to my Amazon author page: amazon.com/author/leefullbright

If you’re partial to print books (who doesn’t love print?), the print version of The Angry Woman Suite (the novel is also about redemption and love gone good—in fact, very good love, and who doesn’t love good love?—and check out the super Kirkus review link over in the right column on this page) will be in the Ingram distribution channel in about a week, and available via both the Amazon and Barnes & Noble websites shortly thereafter—I’ll shout “when” as soon as I hear.

And then I will be eternally grateful to each of you (forever) who posts a review or comment to my Amazon listing, and to Goodreads if you’re signed up with them, and to my Facebook page for The Angry Woman Suite, which is www.facebook.com/fullbrightlee

I know it’s a lot, but reviews and comments (especially at Amazon, leader of the free world) are what can set The Angry Woman Suite apart from the—yikes!—1,800,000+++ other books listed at Amazon! It’s truly going to be an uphill battle (and writers never use clichés?). Simply put, I need Y-O-U.

I’ve just seen the completed back cover text for the print version of The Angry Woman Suite and it goes something like this . . . actually, it goes exactly like this:

A superb debut that exposes the consequences of the choices we make and legacy’s sometimes excruciating embrace.—Kirkus Reviews

When overbearing former big band star Francis Grayson mentions the “murdering bitches” who supposedly ruined his life, his resentful stepdaughter Elyse—always on the lookout for simple dirt on Francis—takes note. Intertwining narrative with Francis, Elyse stumbles across glimmers of big murder instead of simple dirt, while Francis moves perspective of his “bitches” back to the 1930s, to his childhood in Pennsylvania. His coming-of-age story centers on a mysterious painting and search for the artist who he believes can fix his feuding family. Aiding him in his quest is his mother’s lover, Aidan Madsen, who not only mentors Francis’ music career, but knows everything about two murders implicating the women in Francis’ family. The three narrators of The Angry Woman Suite—Elyse, Francis, and Aidan—weave together a picture of two disturbed families who meet their match in the young, determined to survive Elyse Grayson, and the human to a fault hero, Aidan Madsen.

Thanks for stopping by!

Hi all, I’ve been hunched (and I do mean hunched) over a computer for 12+ hours a day, for a week, between clinic (day job) and last minute edits to my novel, The Angry Woman Suite, sent over from the editor at TP.

And what I have to show for all this hunching and sitting? A spasm-y shoulder, red eyes, and a butt that’s spread another six inches.

Is it worth it?

Would you think me too weird if I were to say my idea of heaven is replacing colons with semi-colons and dashes with ellipses points? That I’m totally in my element hunting down slippery paragraph and page breaks?

I’ll be wrapping up this proof in a couple of days, then the manuscript will be formatted again by Telemachus and downloaded to my Kindle, where I get to read the whole bleeping thing yet one more time, rechecking formatting for Kindle readers.

Then The Angry Woman Suite goes to Smashwords for setup for the ipad, Nook, Sony e-reader, and all the rest (more on the print version next post).

And, oh, the cacophony over paper books versus e-books! Of course, now we know it’s not a contest, but a done deal: it’s a co-existence between print and electronic, for now. We’ve all pretty much slipped over to the “dark side,” to electronic, even those who prefer paper (I will always have a love affair with paper, but who can argue with convenience and less money per book, going the e-way?).

Blogger Nathan Bransford annually asks his readers if they will buy mostly e-books, and the results for this year, as well as every year since 2007, since the Kindle debut, are:

What a trend. Hope you’re enjoying the season! I’ll check back in a week or so. Oh! oh! oh! wait till you see The Angry Woman Suite cover–it’s coming along, and I love it. Can’t wait to show you!